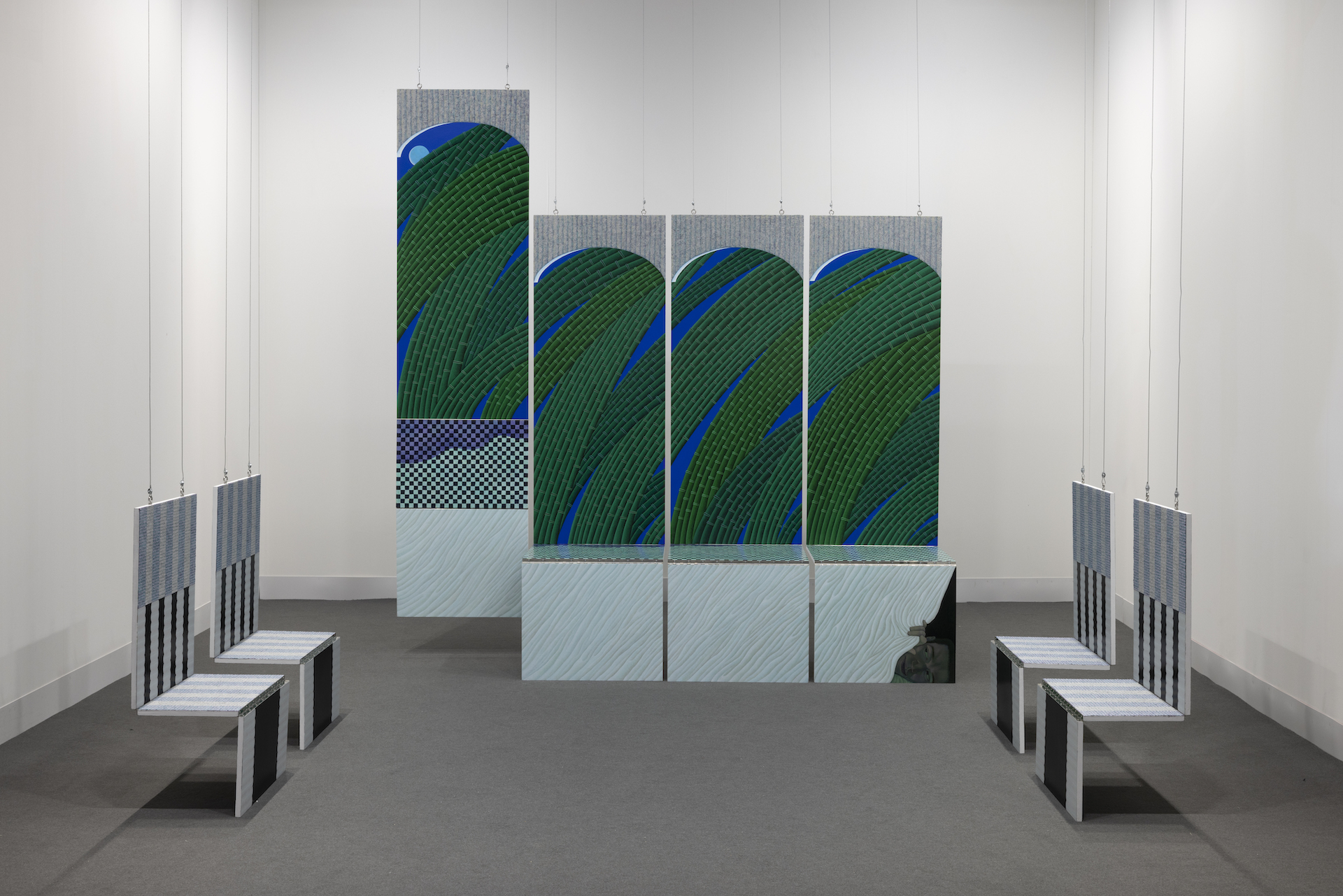 The painting depicts a bamboo landscape peaking behind arches next to columns of differently patterned panels. The work is modular insofar it can be broken down into eight pieces, which can be folded into chairs. Judging by the textured surfaces, the repeated patterns and the layout of the bamboos, the work seems to be covered in fabric. It is not only that Yong Xiang Li often models textiles in his paintings, that he often references prints, patterns and the decorative arts at large, but that his works seem to be cloaked in fabric. To contemplate 8 Chairs (Adolescent Fabrications) as if covered in fabric means that every surface is what it seems and something else.

The moment one thinks it is a painting, the work reveals itself as a chair; and the moment it seems like a chair, it reveals itself as a painting pointing to the chair as decorative thing. This is in part what the artist calls utilitarian drag, an honest piece of auto-theory to describe a clever artistic strategy: masquerading things as functional while rendering them useless. The painting becomes a chair. The chair becomes a painting. Together they become panels, a room, absurd decoration, whatever you please, sir…whatever, please.

The work’s shapeshifting directly addresses the orientalist fantasy of the other who exists to please. The artist is concerned with the playful mutability of such constructions: is that which bends over backwards not in control? Power, after all, tends to shapeshift too. And so do our notions of orientalism. The “excessive preoccupation with fabrics” that in Second Skin (2013) Anne Anlin Cheng considers emblematic of the historical intimacies between east and west speaks here instead to queerness: a reliance on style and surface to insist on the beautiful deceit of sheer appearance.

The most narrative moment in the painting suggests this too, an adolescent male figure peeks behind a piece of fabric, hinting that a hidden world lies beneath the surface. This realization might make a suspicious viewer wonder if the modeled fabrics, sand-infused surfaces and patterns hide something else. Both yes and no: there is always something behind what we see and the surface is all we can see. In this painting Li sees the world behind a veil—a second skin that both conceals and reveals—to mold our fantasies of the vastly unknown.