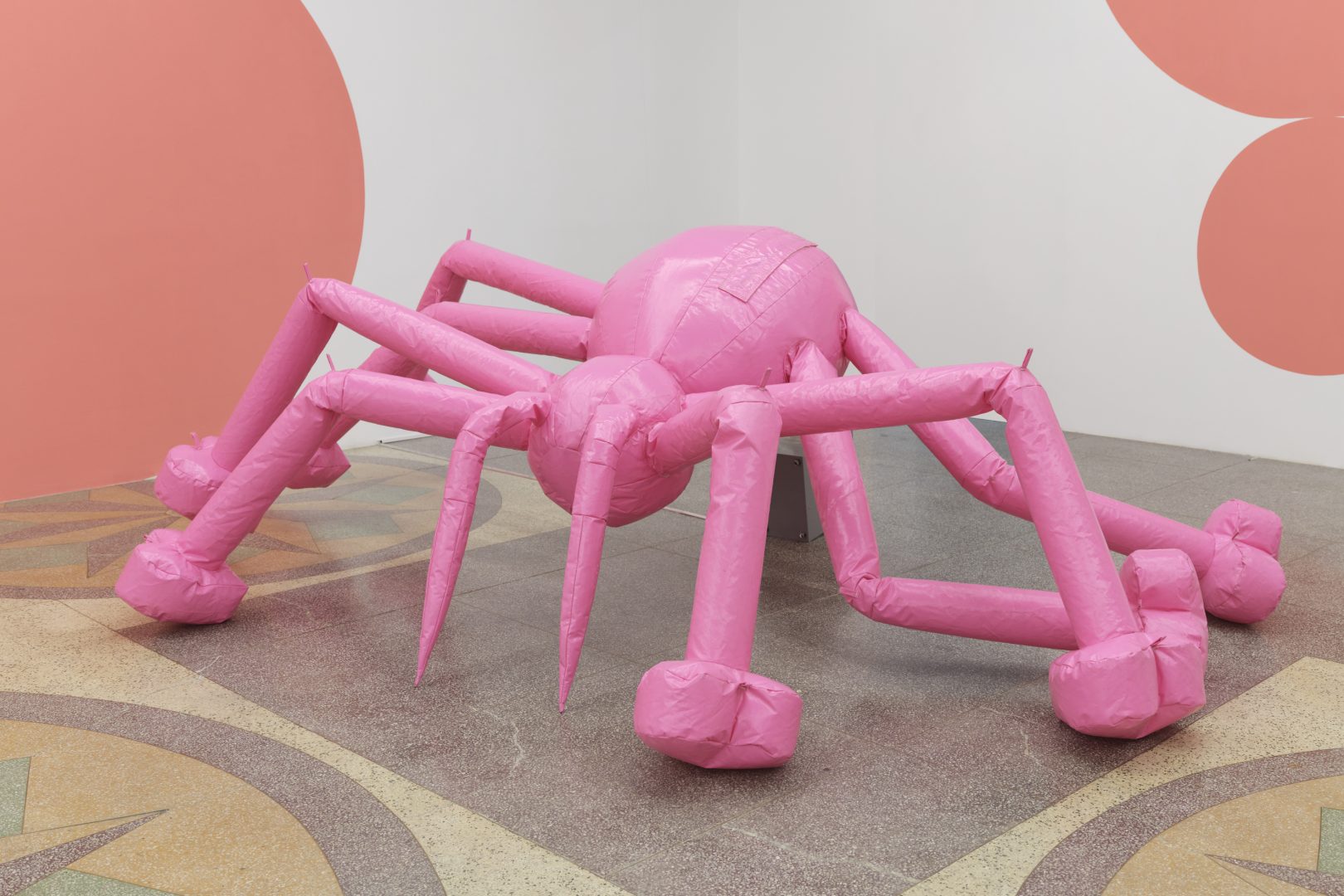 Antenna Space is delighted to present the group exhibition “Where Jellyfish Come From“, co-curated by Ad Minoliti and Antenna Space, featuring the following artists: Ad Minoliti, Li Shuang, and Liu Yin. The exhibition will be opened on January 8, 2022 and will last until March 20, 2022.

During the opening day, artist Li Shuang’s performance “Lord of the Flies” will begin at 6 p.m.

1
Marcel Proust makes the jellyfish miraculously present in “Sodom and Gomorrah“, conflating it with the orchid and arranging a chance encounter on the beach between the solitary queer as the invert and the languishing stranded jellyfish. This contamination and juxtaposition of imagery create a moment of mutual recognition, where a counter-intuitive, remote homology begins to diffuse between the very distinct species. The deadly and sterile jellyfish pity themselves, alluding to the pervasive tragedies in the community – impotent intimacy, deficient joy, and failed commitment.

Ekphrastic writing provokes a metaphorical game of paraphrase, and in Eve Kosovsky Sedgwick’s view, endless interpretation ‘opens gaping conceptual abysses’.(1) This empty, unread, or unreadable sea may be where the jellyfish came from. Choosing to transform its cells into juvenile polyps when it suffers trauma and attaches itself to the bottom of the water like a stem, the jellyfish continues to cycle through a particular life history of “jellyfish-planula larva-polyps-jellyfish”, waiting to be repaired and reborn in a second childhood in the form of reverse aging. The misplaced growth history of the queer coincides with such a mechanism; if queer childhood is invaded by discipline, shame, and rejection, the expectation of adulthood is a kind of redemption, a vision, and courage to start anew.

Inspired by the image and living condition of the jellyfish to the queer experience, this exhibition revolves around the current practice of three artists who seek to find ghostly figures inhabiting each other’s interpretations and subtle connections. The exhibition space is expanded by heterogeneous images and vocabularies, from which specific strategies against thematization emerge: using fragmented and non-sexual reproductive signifier as a method; building an open-ended Aesthetic Interpretation of queerness in the contagious chain of metonymy; to empower an untimely moment, to relieve the anxiety of insincerity.

2
We are amid a new queer particularism, with recent feminist and queer theories attempting to analyze the Anthropocene in blue humanity approaches. The peculiar creatures of the archival ocean are seen as a transit point between natural aesthetics and epistemology. For example, coral polyps’ reef-building process is associated with the sensory method of communal crafting; Karen Barad describes dinoflagellates at the boundaries of flora and fauna as both killers and ‘queer creatures’. Moreover, the umbrella-shaped Medusa jellyfish, extending stinging tentacles from edges, with its obscene lack of form and incommunicative sterility, enables various slippery or venomous connections.

The introduction of broad connections and bizarre theories through their absence plunges jellyfish into contexts of surprising inaccuracy, such as fairy tales in which unrelated images joined together. However, similar to the dangerous features of the jellyfish, fairy tales are often seen as a spell of parental power over children: on the one hand, they bind children to an innocent nature and exempt them from sexuality; on the other hand, they place them in the fate of heterosexual reproduction, to be consumed as pornographic objects. Furthermore, this disciplining and deceiving indulges in a generally toxic atmosphere that celebrates adult intelligence and blindly reverences the knowledge system when children’s experiences are frivolous and correctable.

The jellyfish’s wanderings between power structures offer a vision of the childhood state: not appearing as a specific character, evolving a texture that cannot be tied to melodrama and is challenging to capture in language, constantly squeezing out water and scum through an orifice (anus, to be precise) that gradually deflects any concrete description of itself. Continuing the path of the jellyfish, standing on the edge of agency and intellectual superiority to re-examine fun, stupidity, and clumsiness, the fairy tale described in this exhibition has nothing to do with the plot. Rewriting means severing the original narrative connection of the images, turning the gaze to the images that are juxtaposed by the fairy tale itself rather than attempting to generalize them, in other words, “touch feeling, don’t know it”.(2)

3
Both dangerous and fragile, prone to injury but able to withstand it; with precocity but forced to experience late maturity; drifting in clusters but unable to communicate with each other; they never realize their own beauty – what makes such a queer experience? Or, what are the material, the causation, and the jellyfish’s vehicle? Faced with these unanswered questions, we try to portray them femininely.

There is no solid figure of a jellyfish in the exhibition. However, like those continual flashbacks in a story, obscured by a sweet ending, the jellyfish implicitly hints at the reason for its presence.

In the very moment as the ending and the beginning, it tries to retain everything, but inadvertently strangles the answer; the transparent torso dissolves in the liquid, while those scattered stinging cells still tirelessly inject poison; it is powerless to intervene, only to let the taint spread and erode repeatedly. The jellyfish waved its phantasmagoric dress and made its appearance time and again, only to dissipate in every wet fairy tale. 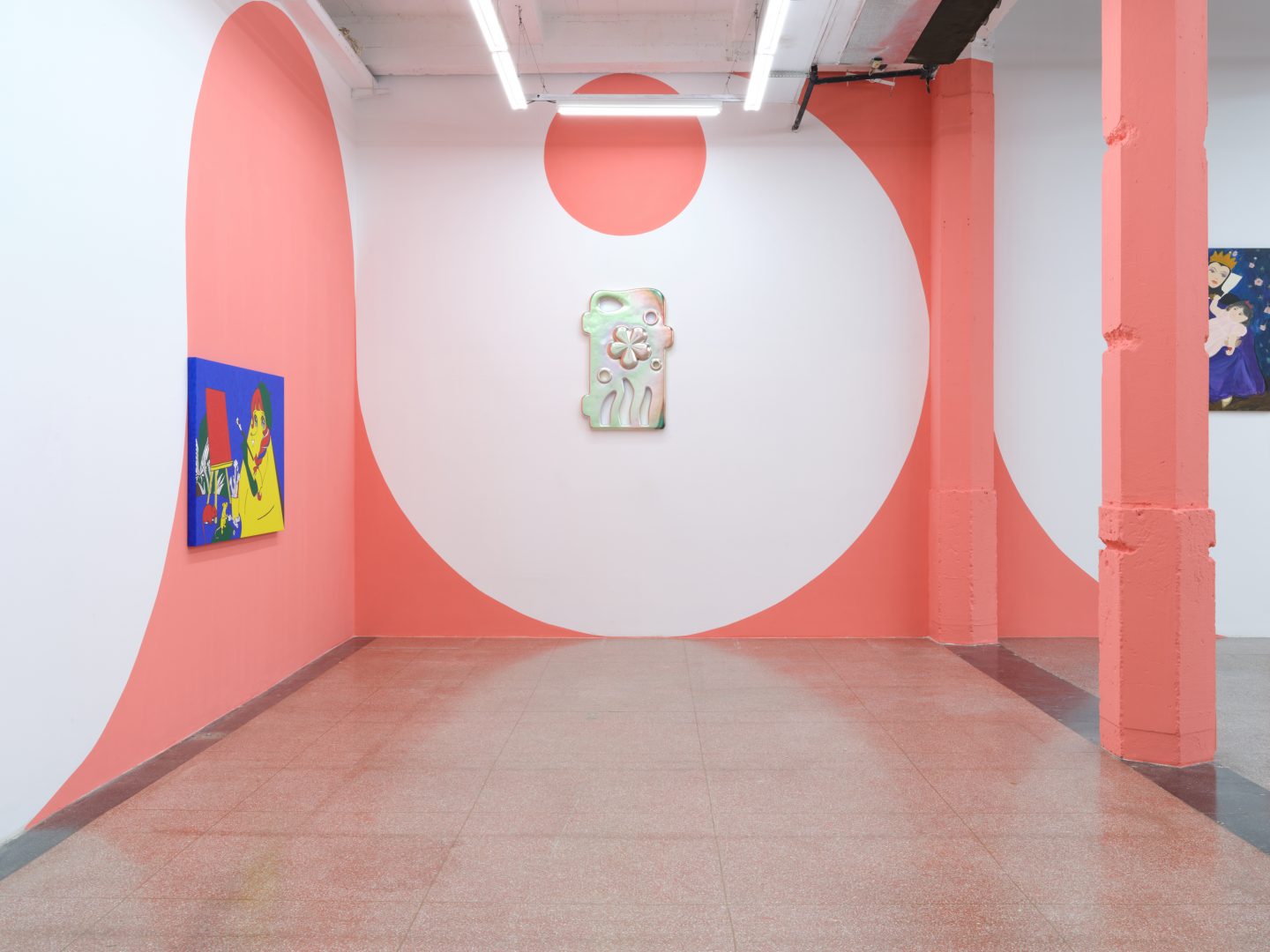 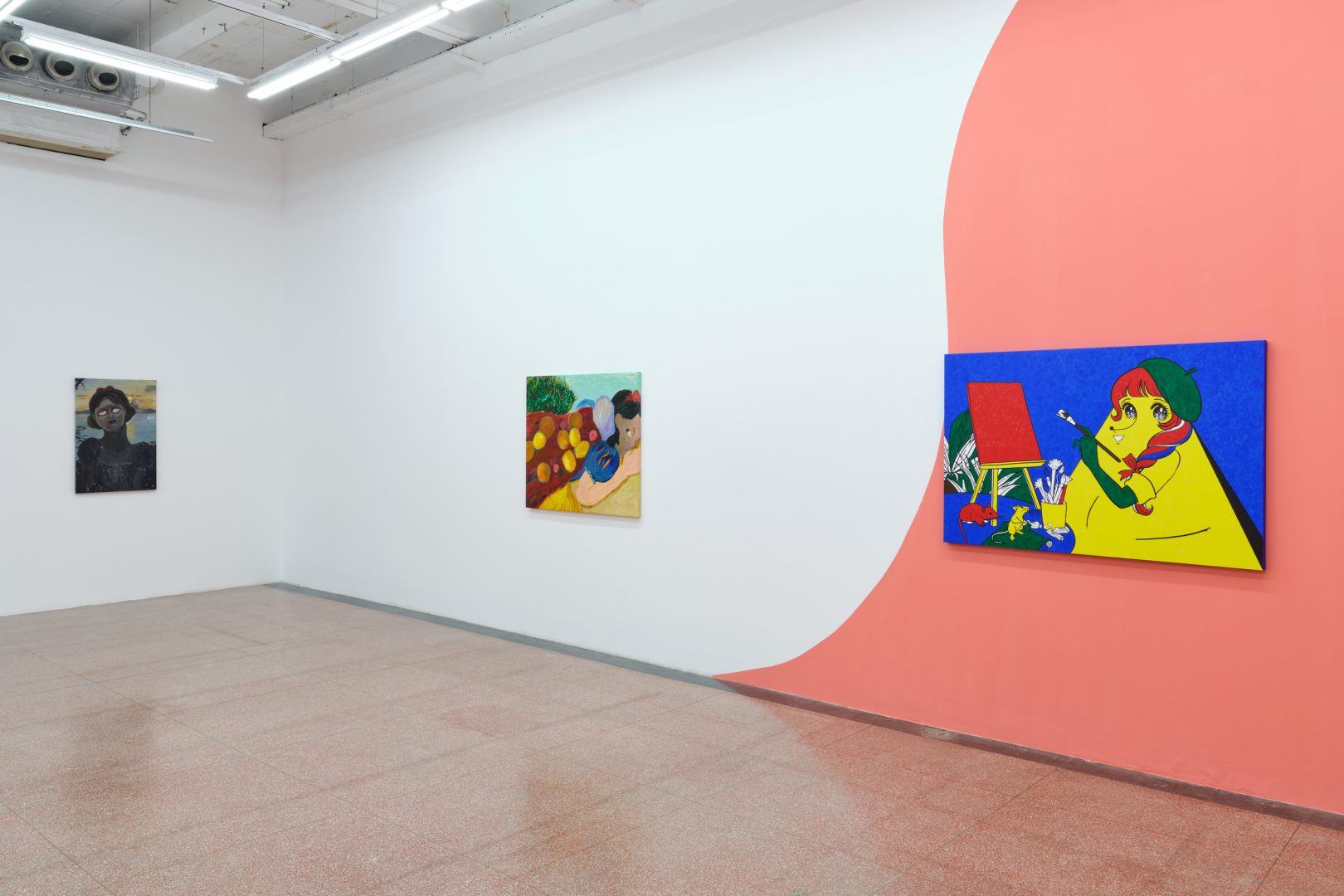 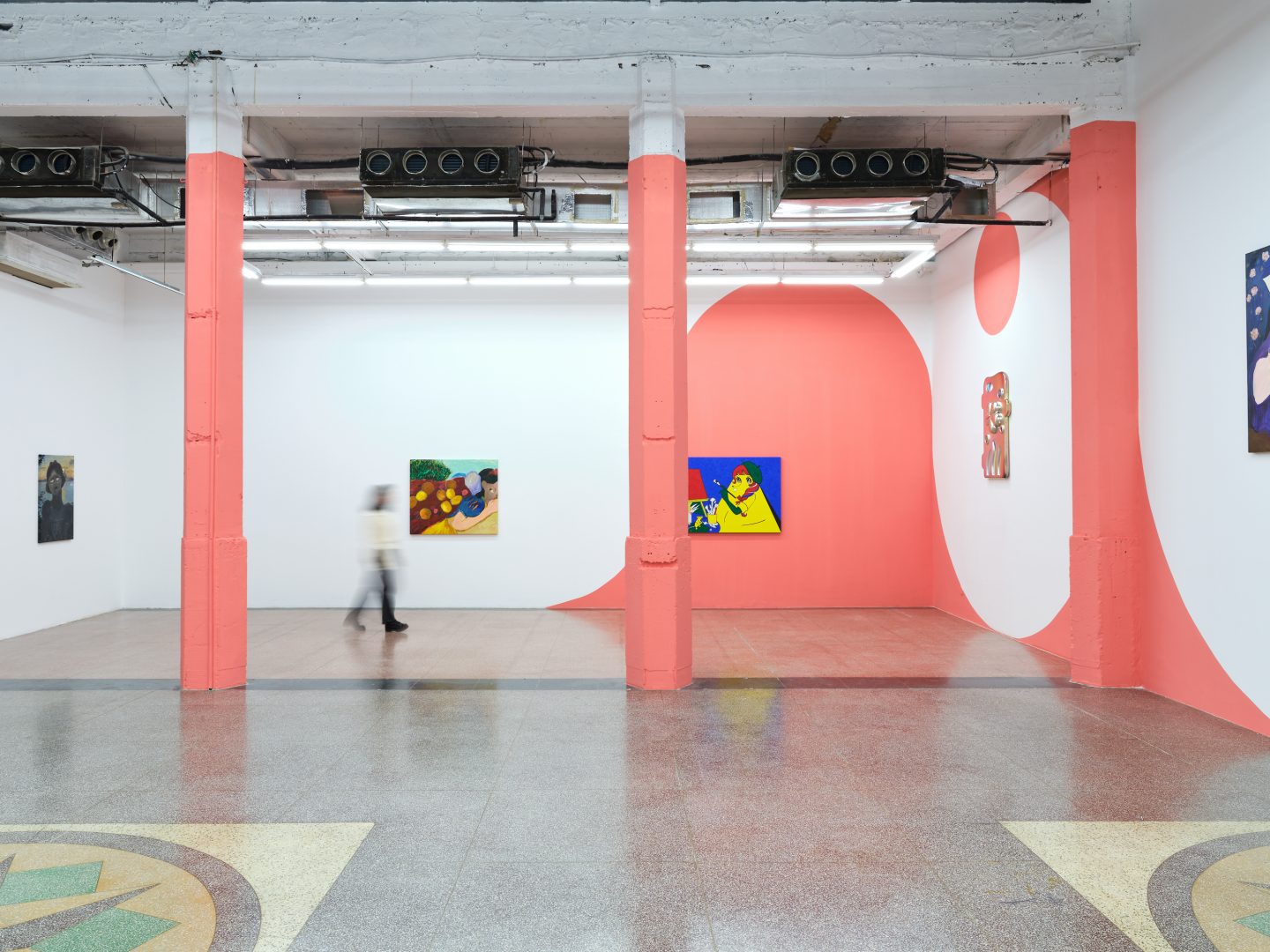 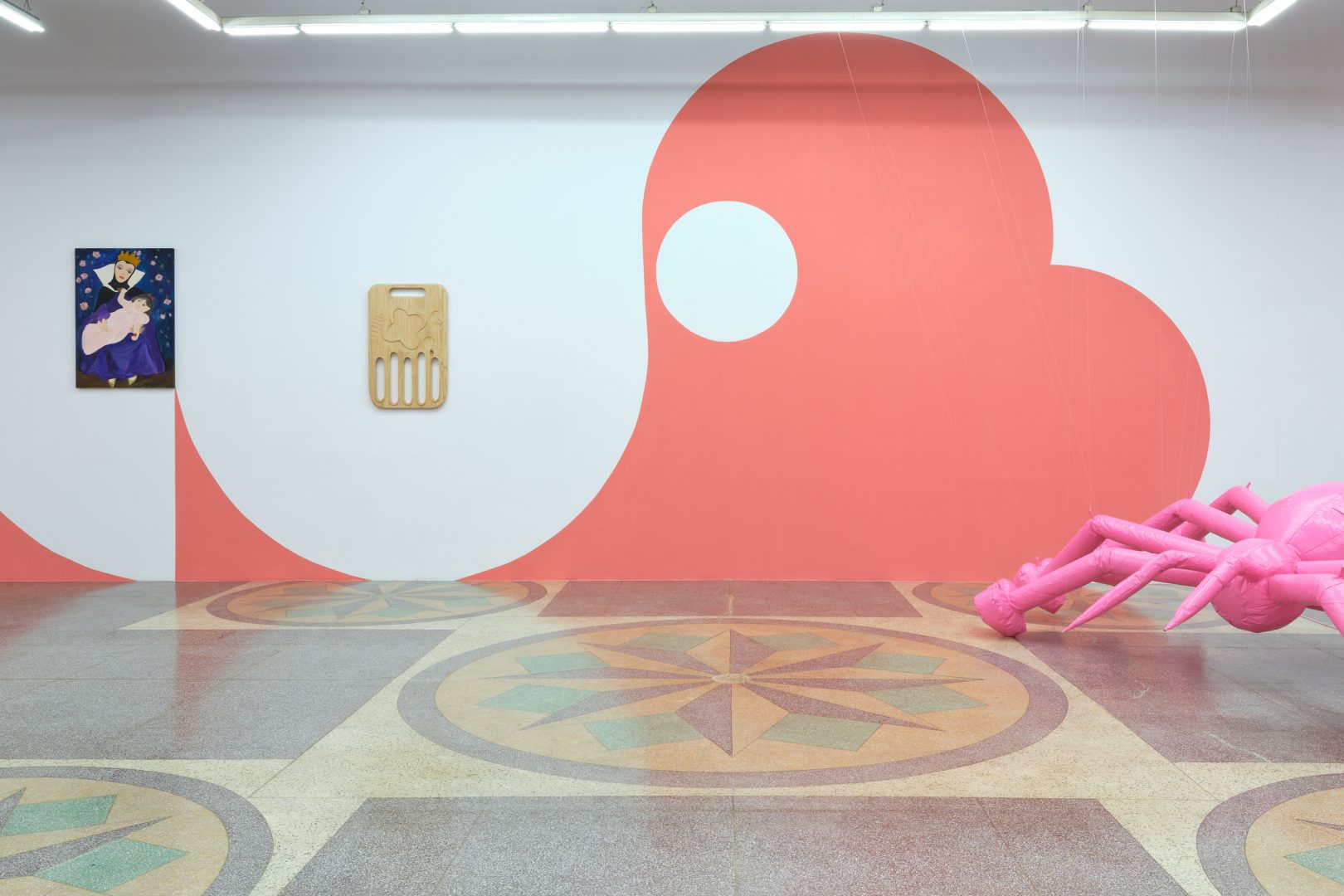 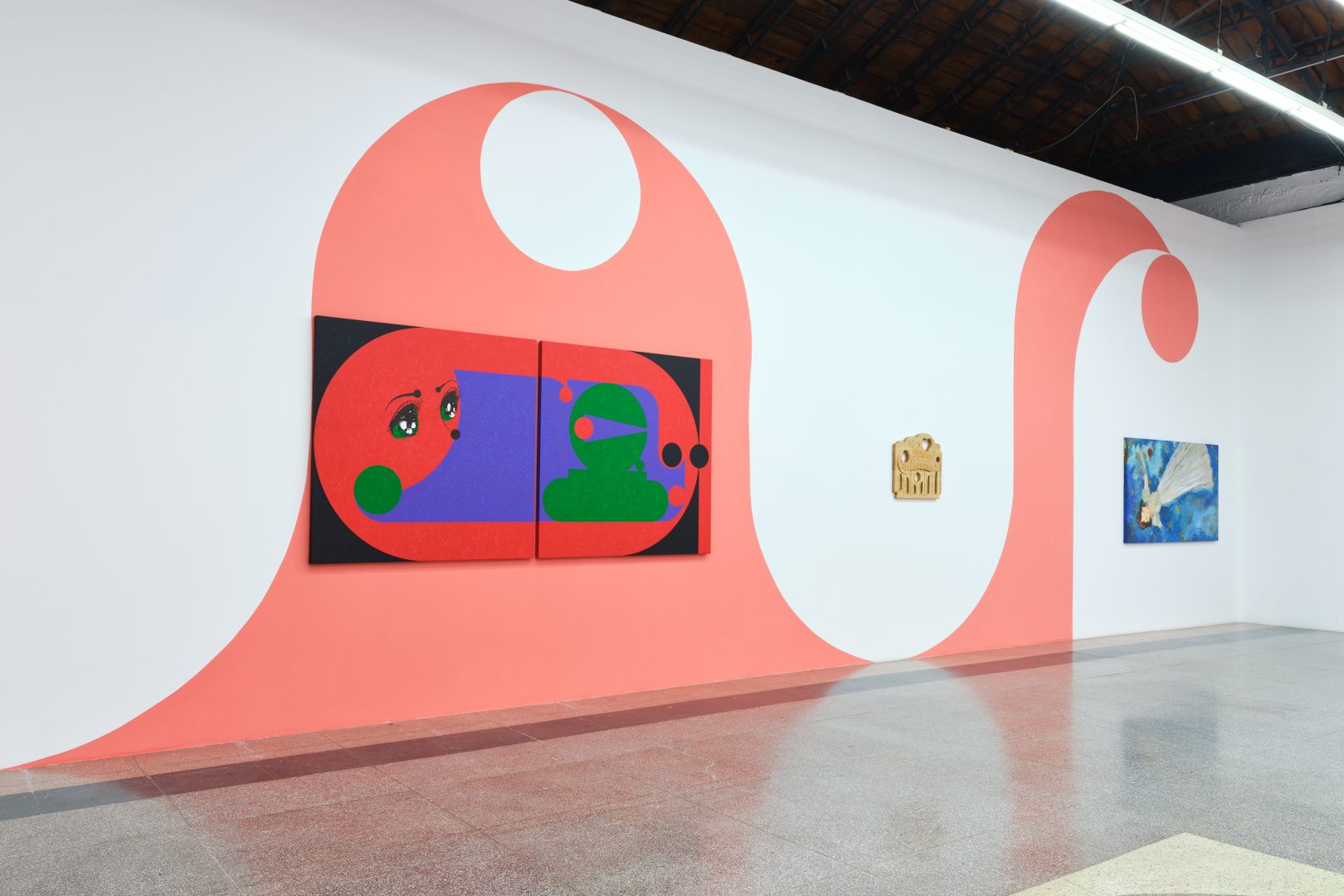 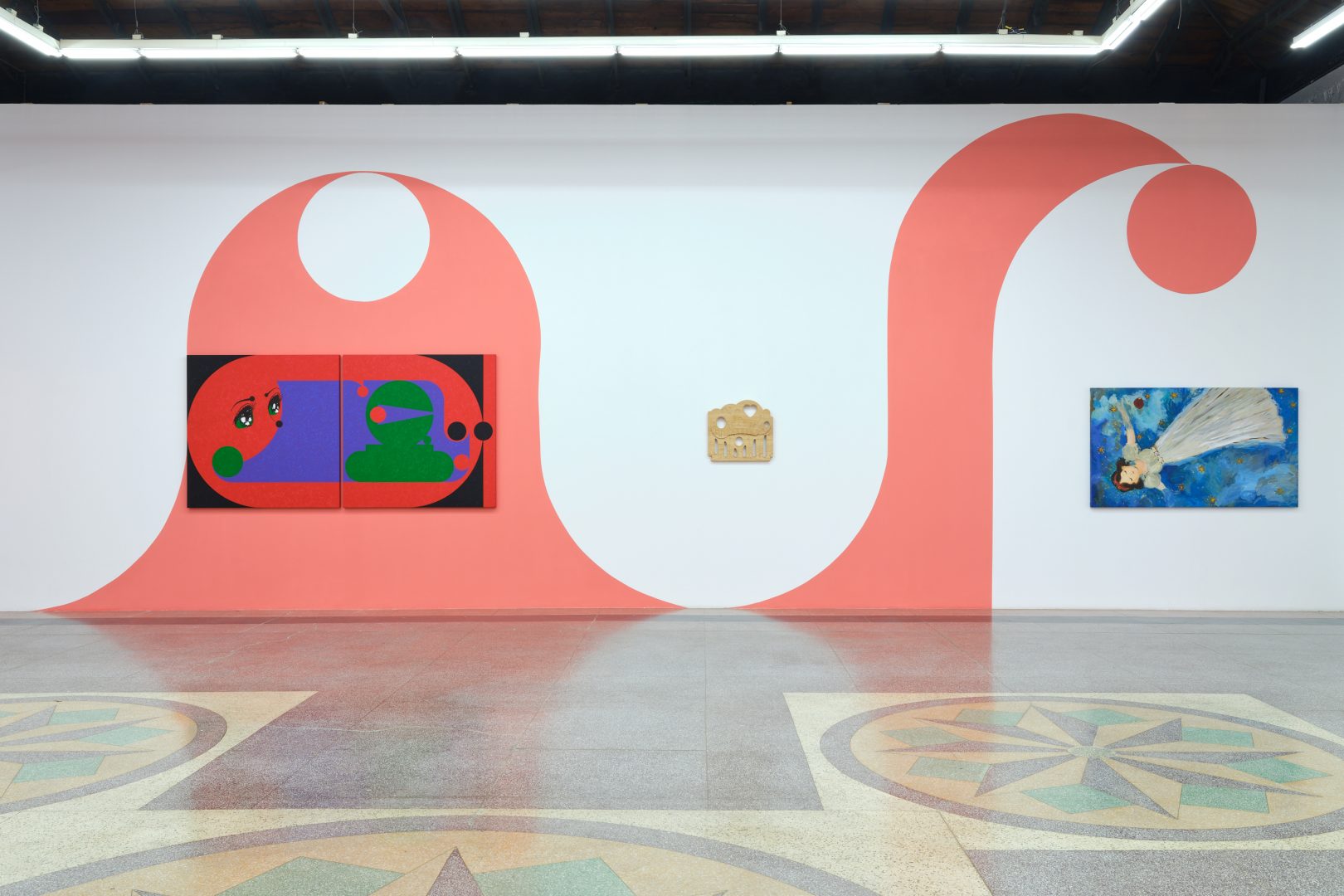 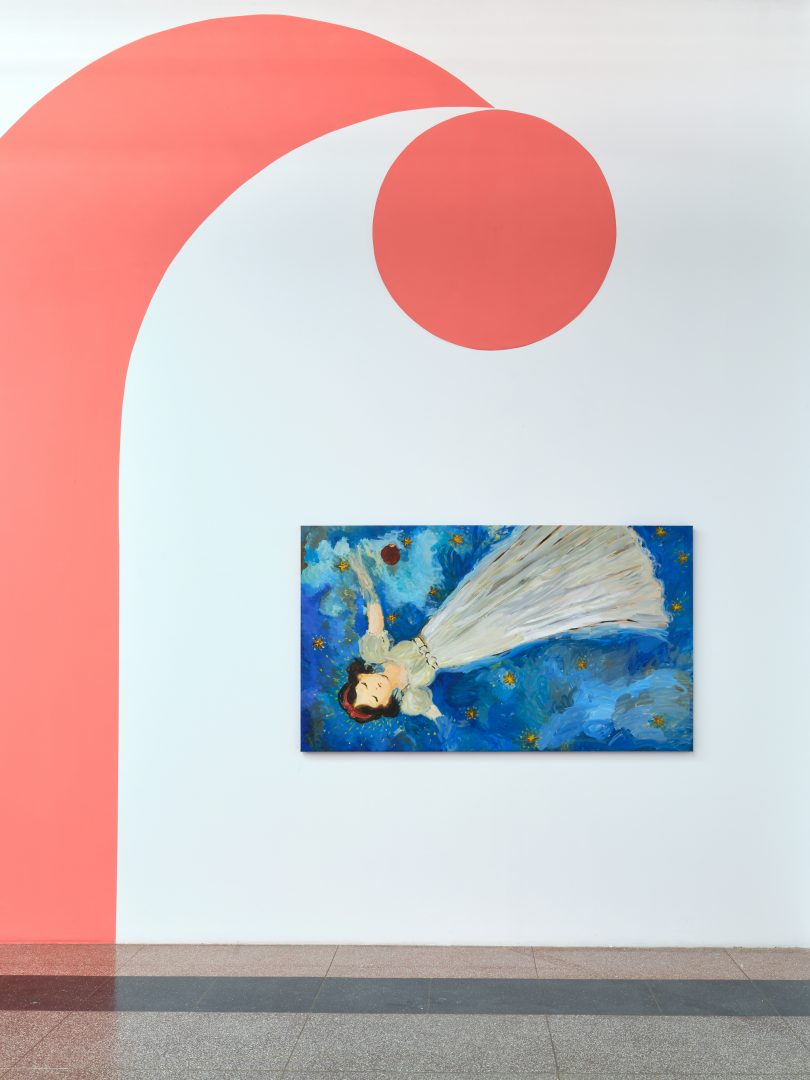