Antenna Space is pleased to announce Yong Xiang Li’s solo exhibition Inside Job will be open from February 27, 2022 to April 2, 2022 at LC Queisser.

The exhibition presents three new “chair paintings:” painted modular wooden panels connected via hinges that allow them to assume three-dimensional shapes off the wall and ostensibly be broken down into chairs. As collapsed “bamboo landscape paintings,” these works flirt with the allure of the decorative and their status as mere surface, while citing an aesthetic history of exoticism in Western art and design.

Li’s approach to painting is historically informed as well as mimetic, shifting between trompe l’oeil effects, portraiture, and object design. Engaging in a promiscuous push-and-pull between painterly styles and forms of objecthood, the artist works in a versatile way to highlight the historical importance of style and to break with the supposed transparency of the “canvas economy” of Western painting; revealing how this economy always comes with sociopolitical strings attached.

Picnic at the Bamboo Garden (2021 – 2022) is inspired by classic “Asian” landscape motifs of Rococo, a particularly ornamental art historical period that exhibited a deep fascination with and hyperbolic mistranslation of the aesthetics of the “Far East.” This cultural zeitgeist caused a period of frenzied copying and imagining of Oriental motifs in decorative Western consumer goods—a trend also known as chinoiserie. These nodes serve as departure points for Li’s engagement with the fake language of “The Far East” as inherently pluralistic and ambivalent: a trope that, in one end, cites colonial power relations, and on the other, a pedestrian “schlock” aesthetic that, due to its ignoble decorative status, represents an alternative to the myth of High Art.

Within the anachronism of the free-hand appropriation in chinoiserie interior design, Li finds an opening for a critical examination of the Western painting tradition and its relation to surface, décor, and alterity. The artist’s chair paintings confront the painted imagescape with that of decorative surface: presenting paintings as nothing more (or less) than painted objects or painting on objects playfully rejects the romantic idea of ex-nihilo, the “blank canvas.” This heroic notion of aesthetic depth, authenticity, and innovation runs deep in the history of painting and emerged alongside the history of Western imperialist expansion. The legacy of these dominant aesthetic systems during Western modernity is a binary worldview that, in glorifying and normalizing a masculine autonomous idea of art, has pitted together a range of signifiers as socio-aesthetic Others: ornamentation as superficial as feminine as ethnic.

Rather than a pointed attack on these historical aesthetic frameworks, Li’s structures entertain an alternative trajectory for the painterly medium that reconnects with its motley histories across styles, media, geographies, and forms of value. The artist’s embrace of painting as surface—not as surface “for its own sake,” but surface of, in relation to, or in service of something—highlights its unsung history as a decorative, tactile object, a queer power relation, a form of labor. This is underscored in small painted paneling on textured, sandy surfaces, perfectly modeled to fit the pre-existing paneling underneath the windows of the gallery. By ostensibly becoming one with the building, Li proposes painting as a medium that, far from its dominant history, is able to hide or dress up to be something else, depending on the occasion. These themes of being a guest, stranger, or pretender are echoed in Li’s 2019 video A View From a Suspended Bridge (with footage by François Pisapia) also on display. 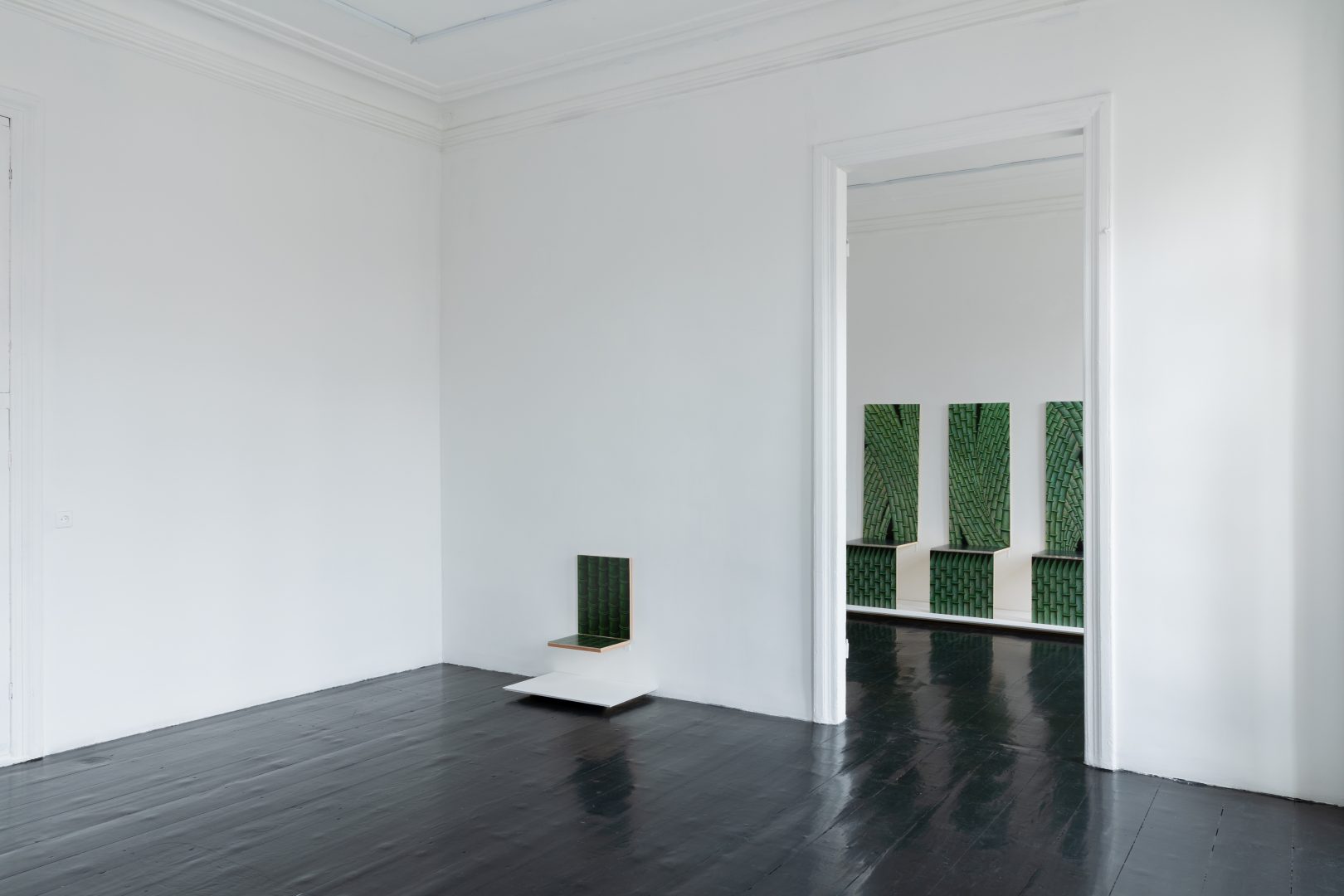 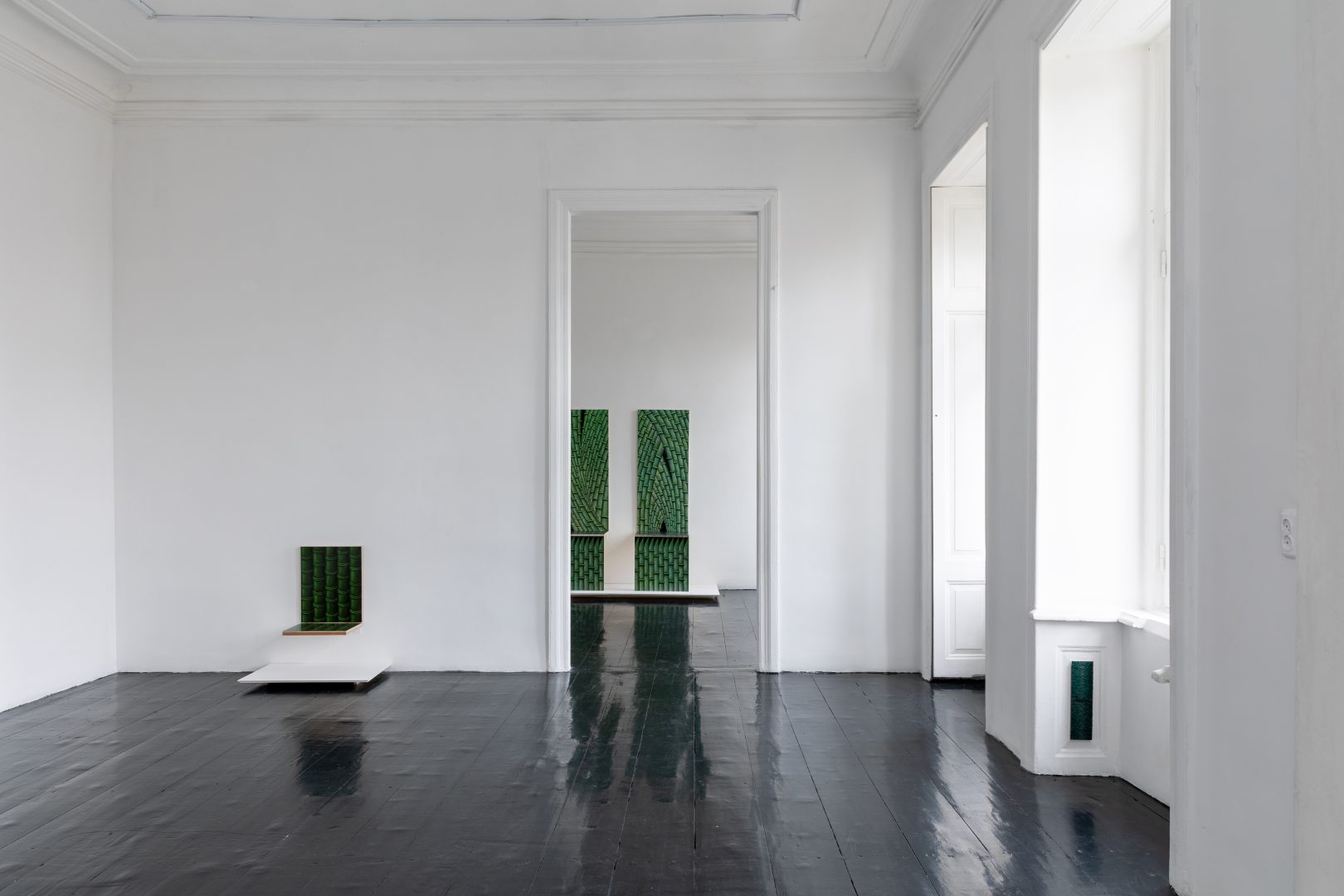 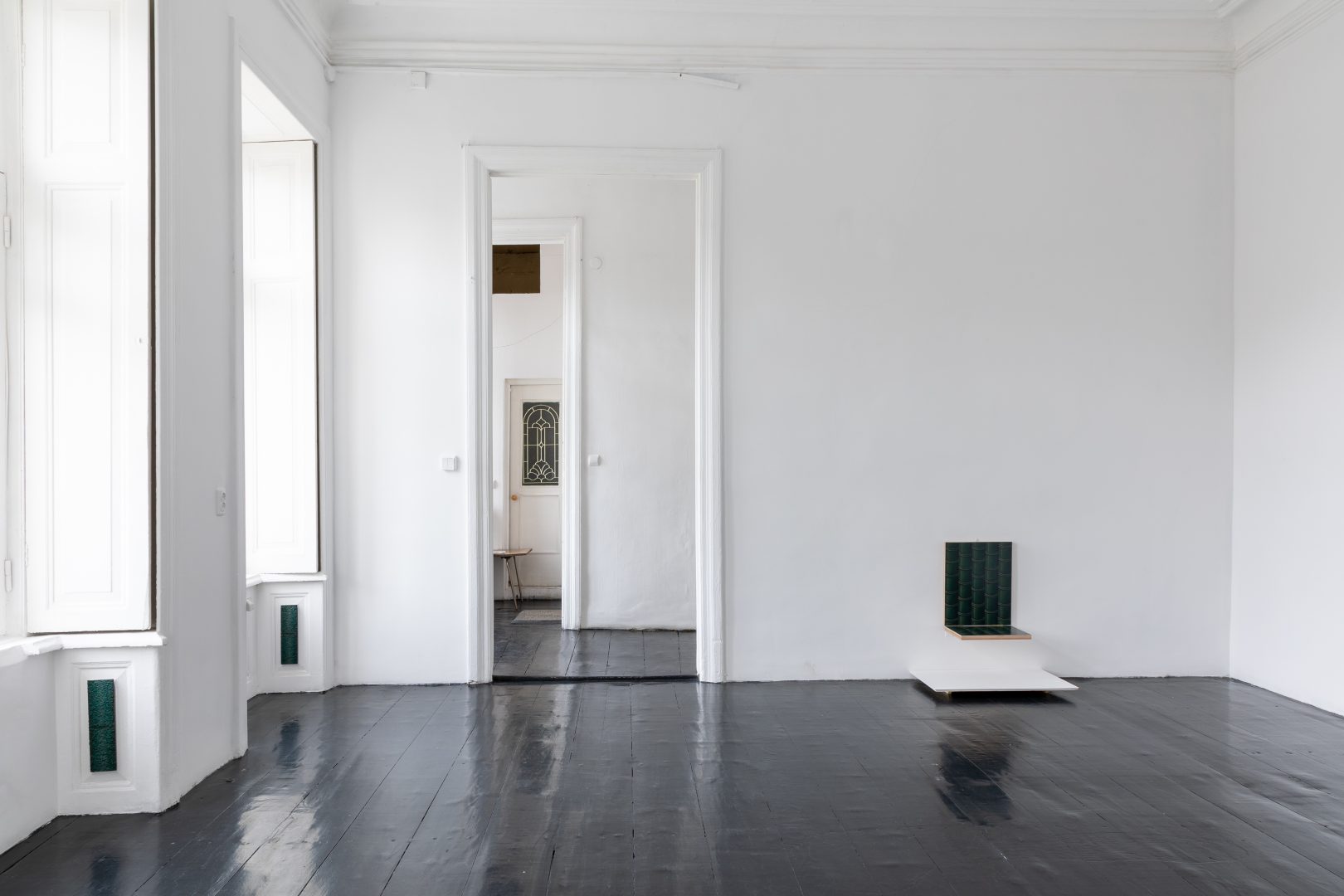 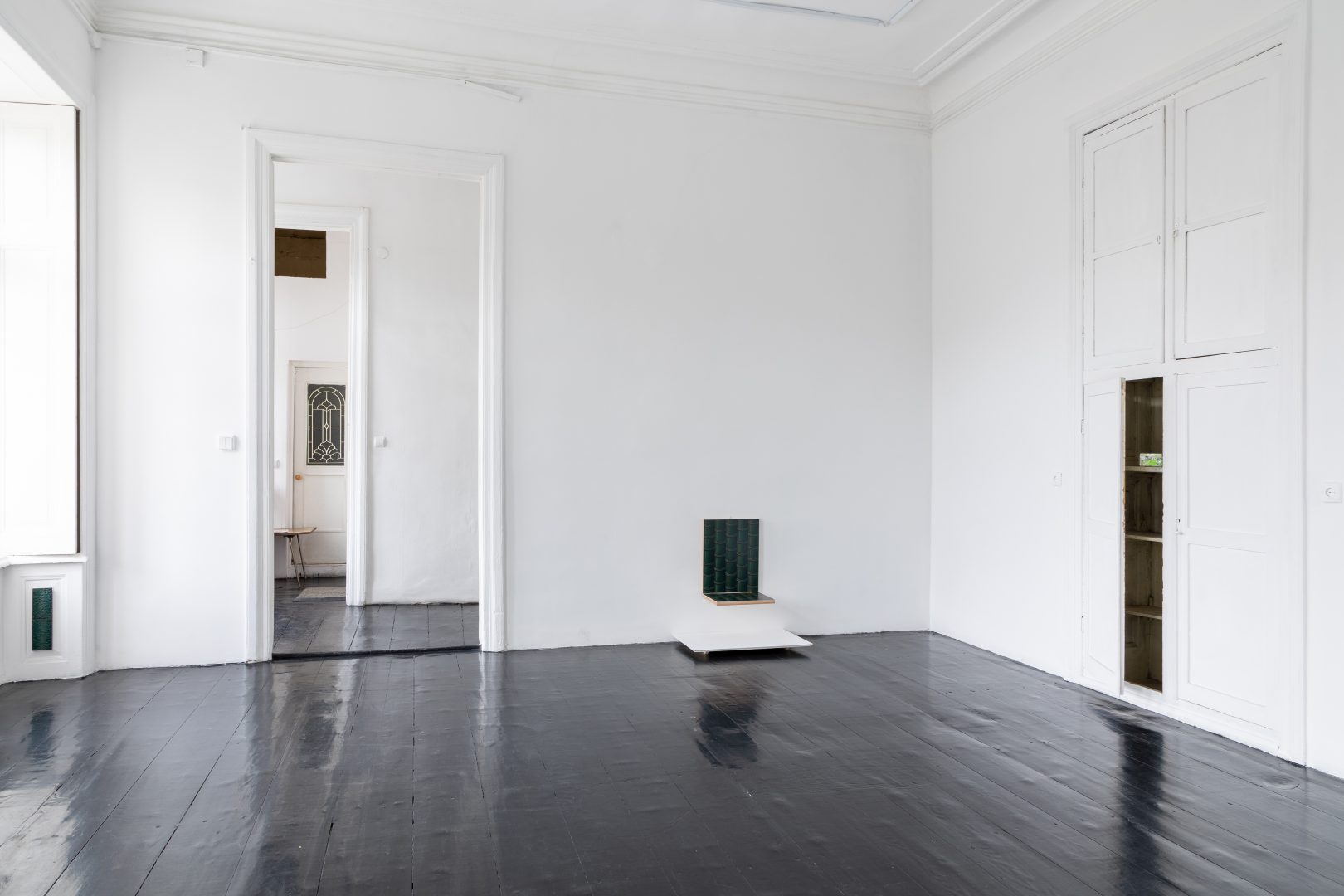 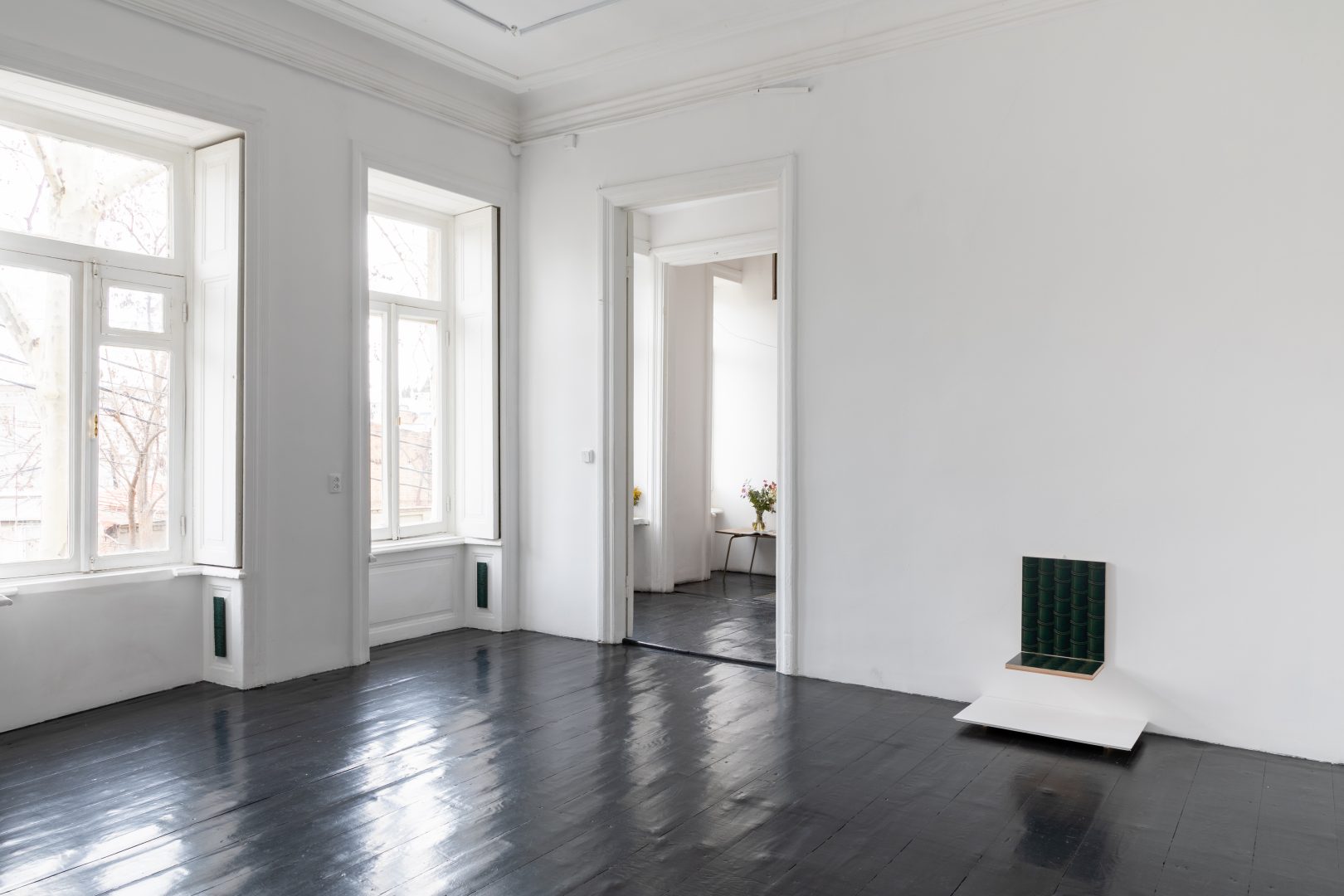 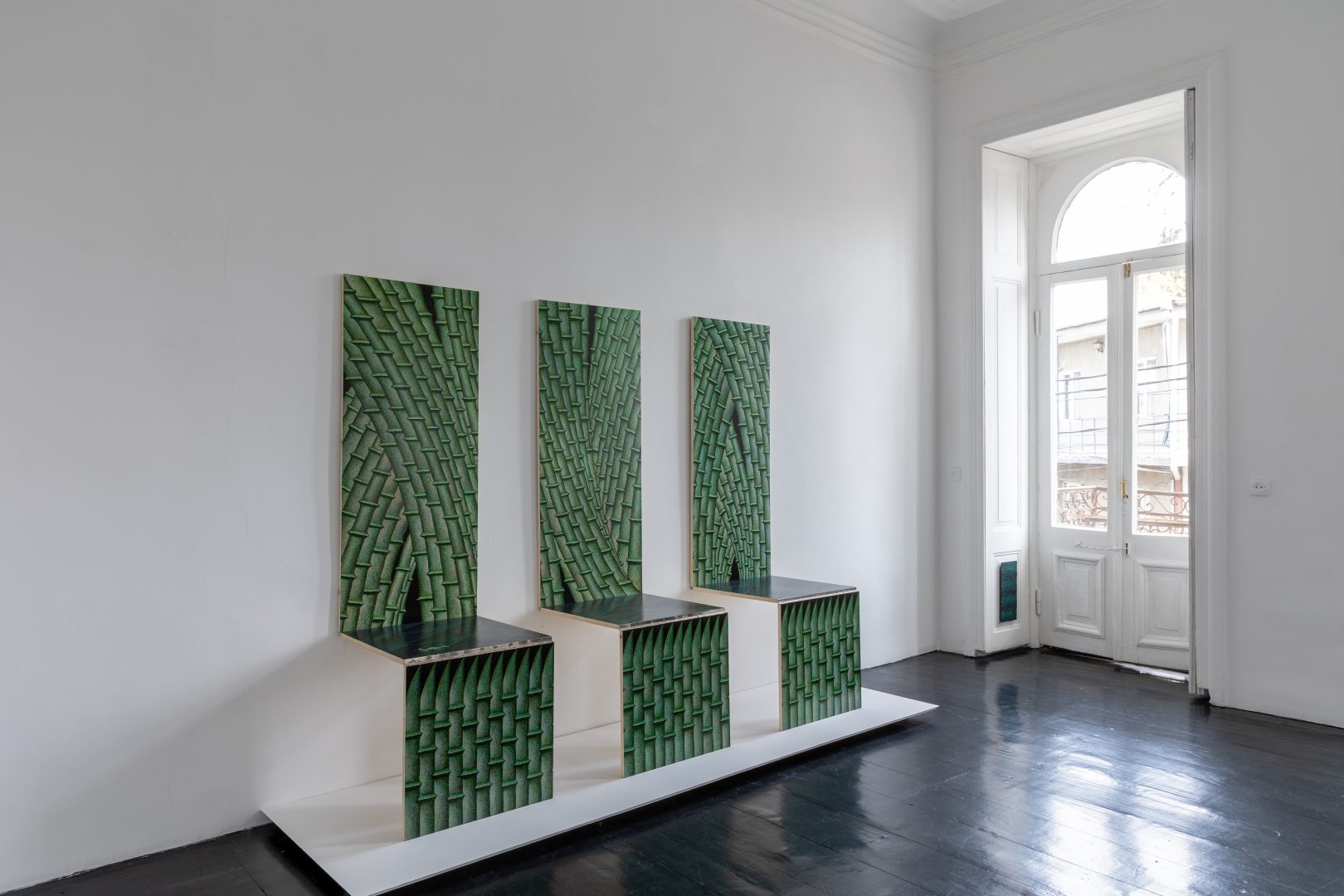 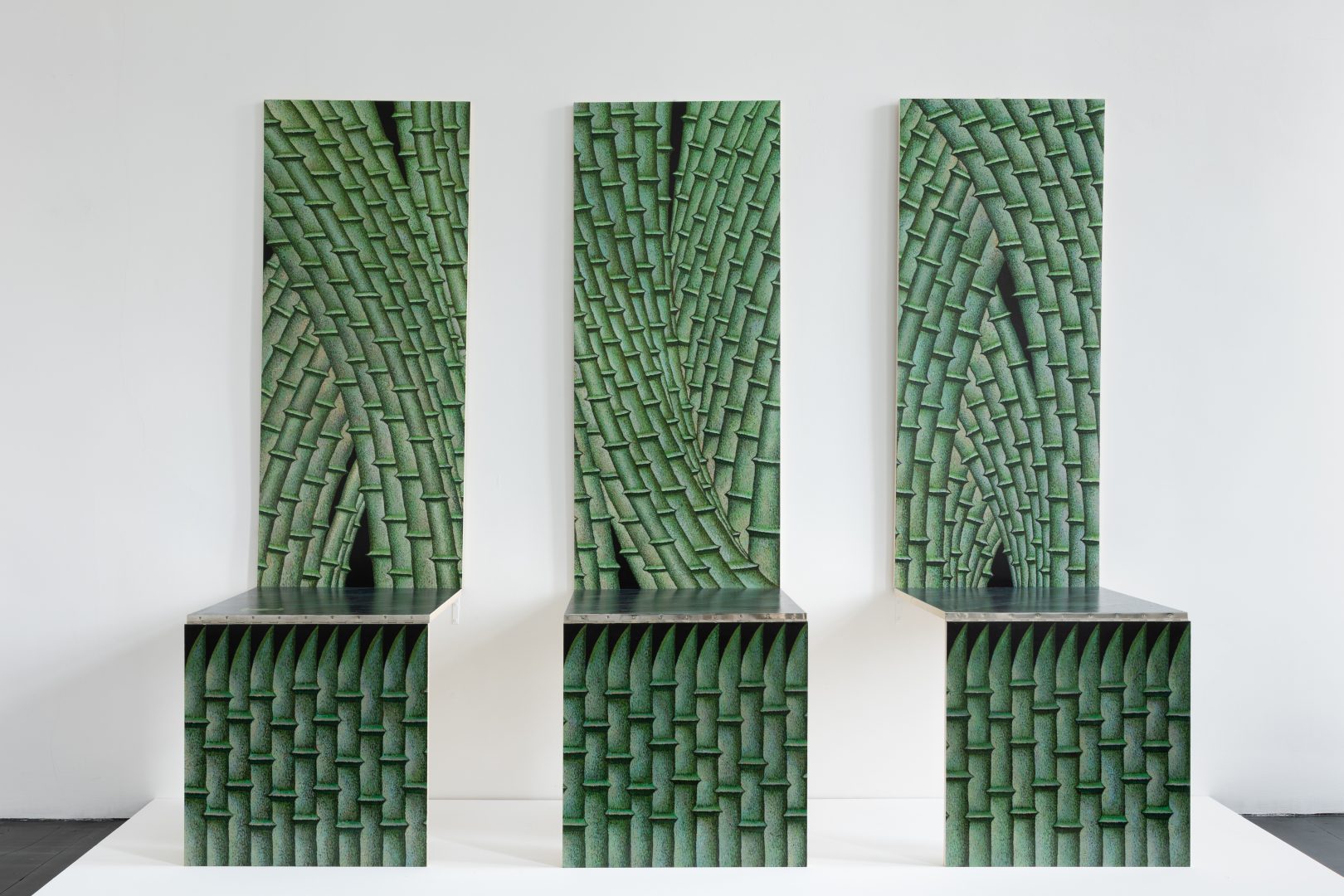 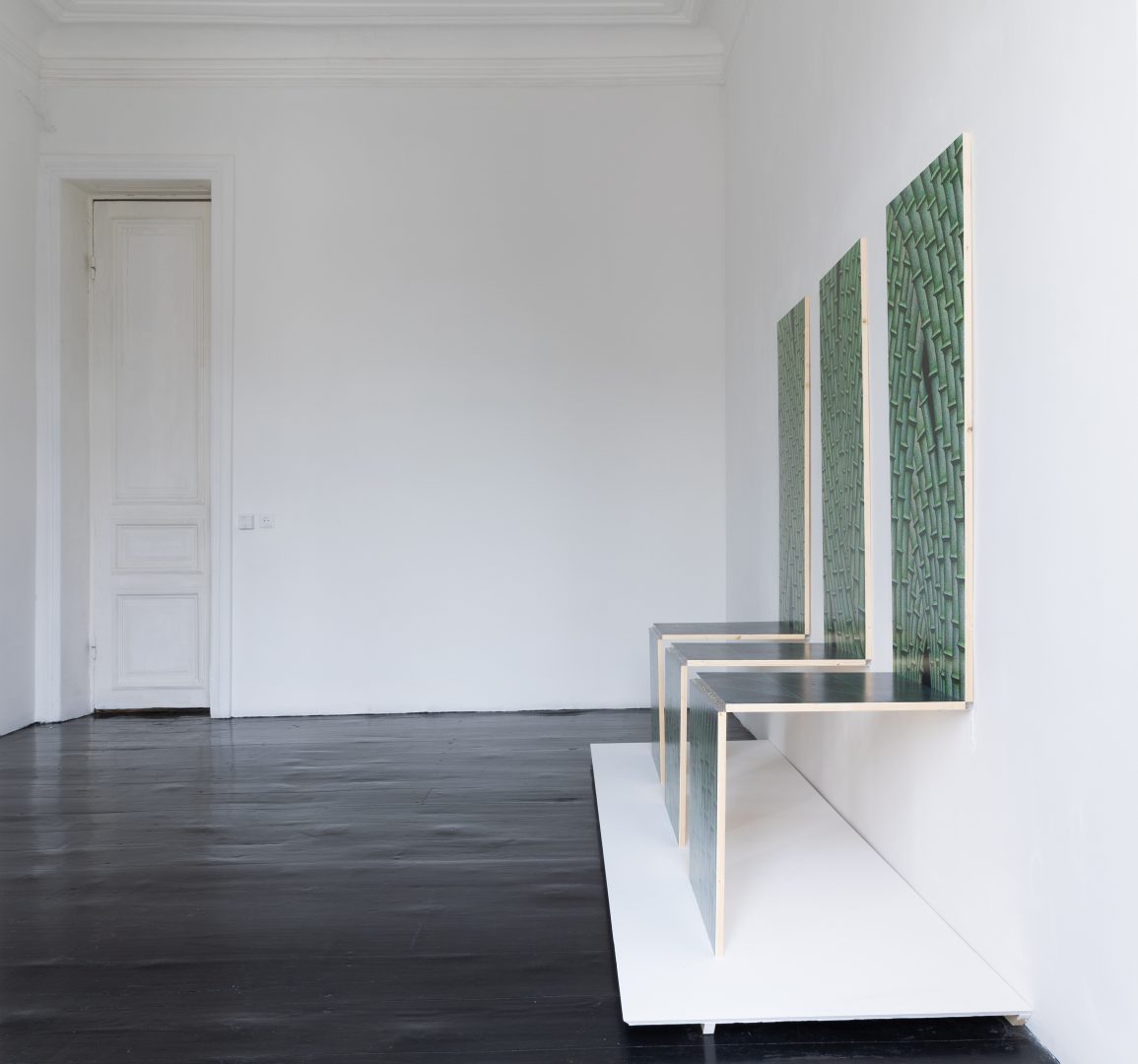 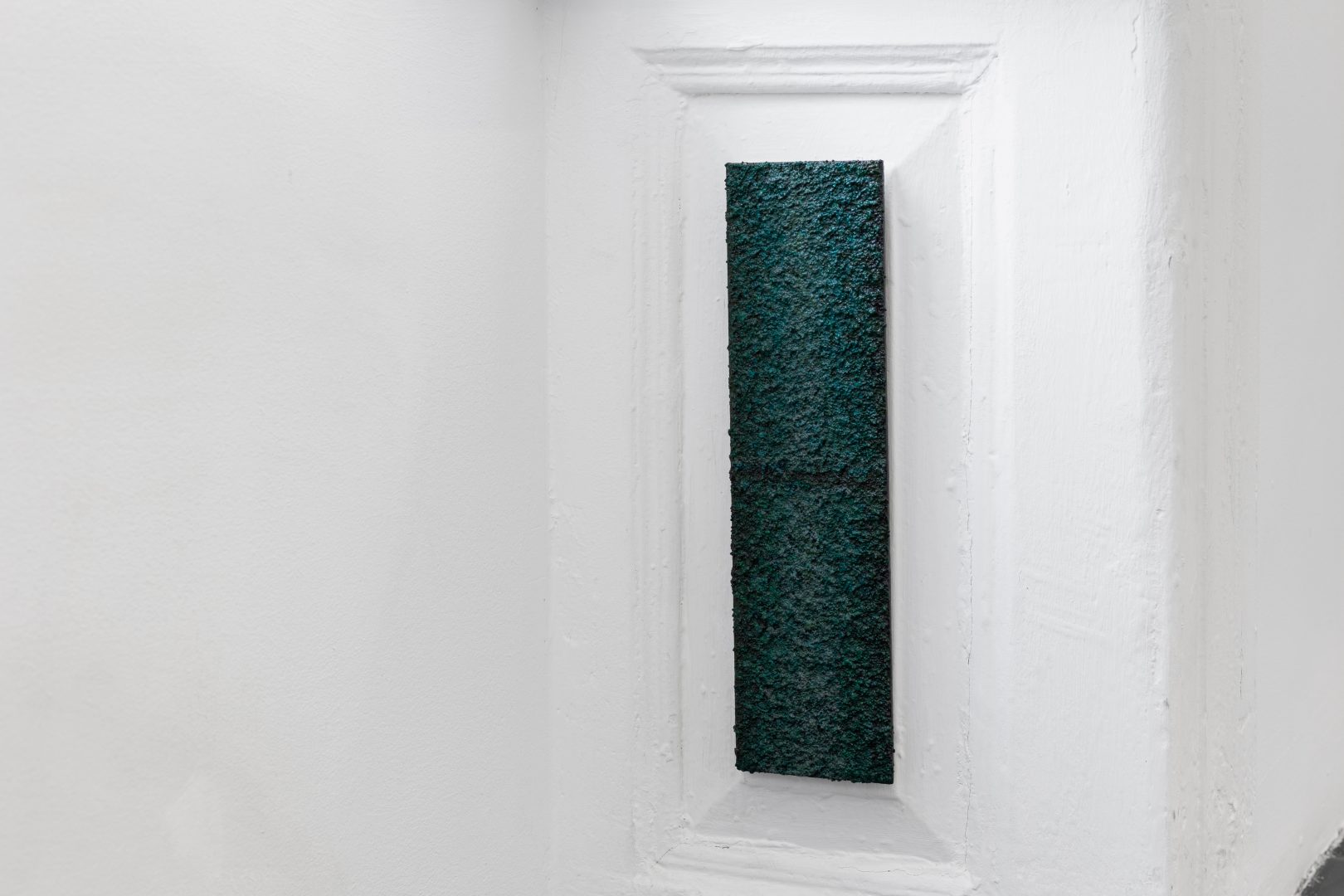 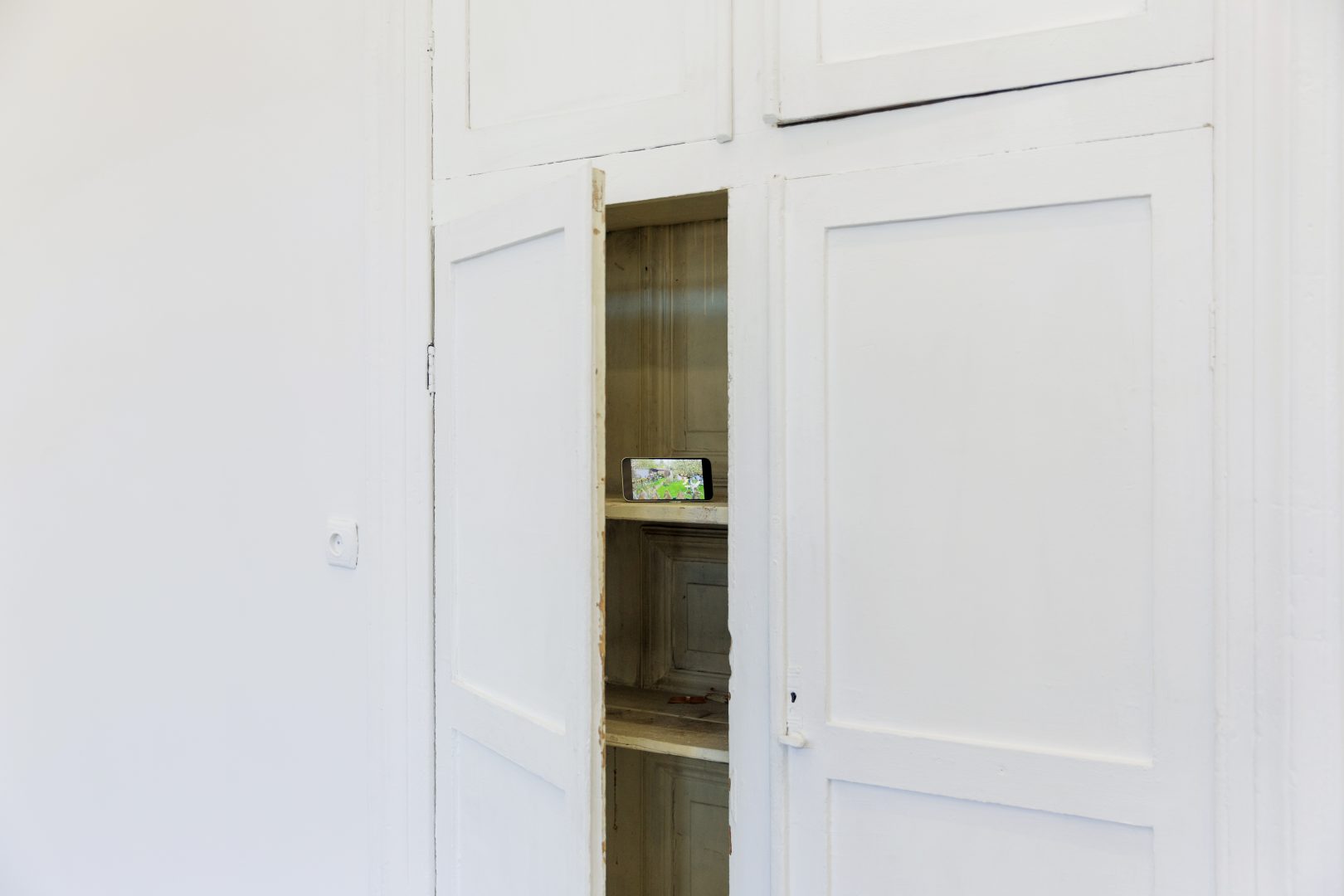 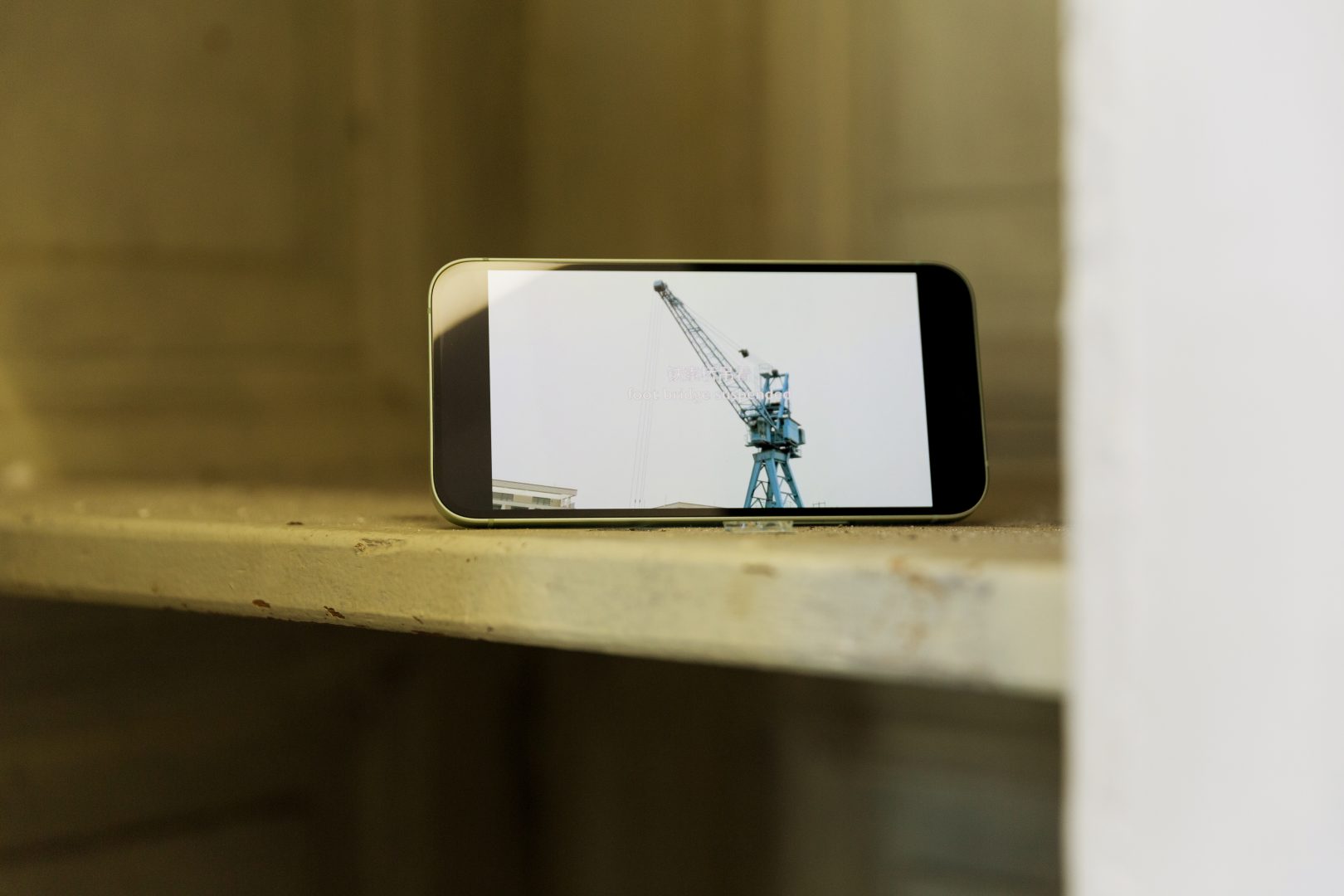