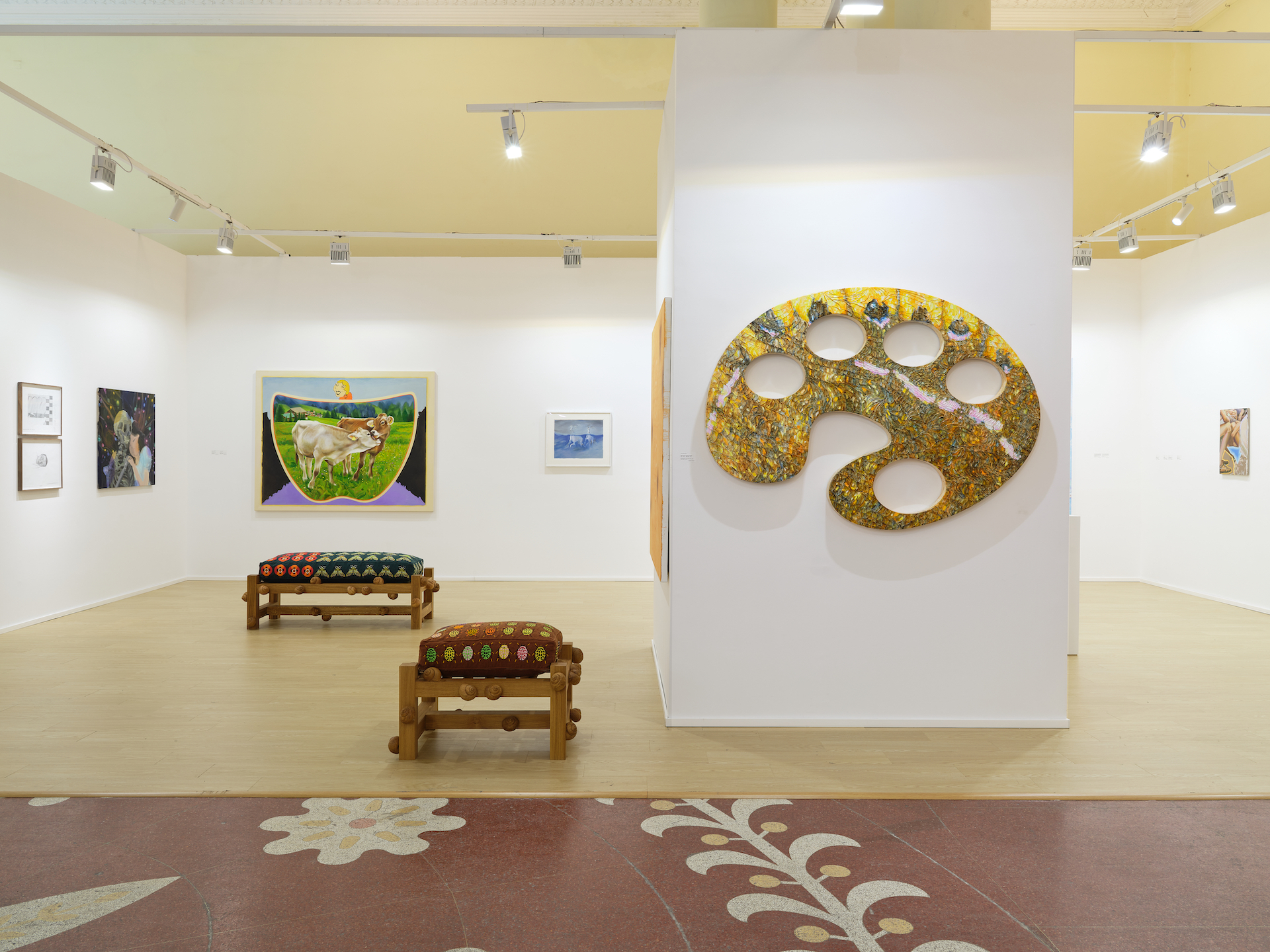 Milky Way (2022) has linguistic, pictorial and cultural connections to two of Allison Katz’s exhibition experiences this year. Cows first appeared ambiguously in Katz’s work Someone Else’s Dream (2021) in her solo exhibition “Artery”, as an image of debasement, a human return to animality: a tale of both humiliation and humility. However, across many fairy tales, cultures and religions, the cow symbolises fertility, generosity, motherhood and the origins of life, and this new painting refers more explicitly to this narrative. The the cow as a myth and metaphor is in striking contrast to reality, while the title and implication are a reinterpretation of the 2022 Venice Biennale group exhibition that she is a part of: The Milk of Dreams. Connecting the slang use of cow (an unkind term for a woman) and returning this poetic feminine fluid back to its source, Katz plays with the joke of making Surrealism literal. In terms of the linguistic and pictorial aspects, inspired by silent film posters, Katz creates a cartoon on the top of the inner frame, an avatar, comic self-portrait or stand-in for the artist. This laughing caricature that overlooks the scene is both a joke and a serious reminder that images are constructed and under the control or influence of a perspective; subjectivity is never objective. In addition, the title, Milky Way, also referring to our galaxy, of which the name and the expression are paradoxes and indefinable unknowns. The “way” implies a road and a direction, but outer space has no orientation. In this contradiction we have blocks in our recognition of what words are trying to say; they conjure images beyond their usage. Image fills the absence of language and reaches a rebellion against words.

Both of the works presented by Evelyn Taocheng Wang are related to Alice’s Adventures in Wonderland. Cover up wrinkles and scars? Alice would never use the same foundation as the Red Heart Queen! follows the content and style of Evelyn’s solo exhibition “Heart of Eyeshadows” at Antenna Space in 2021, where Evelyn created a zone that explores fashion, beauty and feminism. The brushstrokes and stereoscopic lines that seem to be applied with foundation are in fact simulated by acrylic toning, which on one hand adds layers and dimensions to the work; on the other hand, it emphasizes an identity and culture by way of its yellowish hue, thus confronting the asthetic represented by the Queen of Hearts. Evelyn Taocheng Wang uses traditional Chinese painting techniques to render western fairy tales and children’s stories, exploring colonial history, identity and women in the process. Tears Sea of Alice/from Alice in Wonderland examines the boundary between rationality and sensibility by depicting a dramatic scene from Alice’s Adventures in Wonderland next to scientific and technical equations, such as the quadratic formula, or Fourier transformations.

In her palette paintings, Guan Xiao continues her exploration of duality and breaks down the basic elements of painting in an effort to expand her understanding of the medium. She returns to the artist palette form and further abstracts it by increasing its scale and puncturing holes in its surface. She uses a polyester putty base to simulate brushstrokes; emphasizes the fluidity of the paint and the patterns, textures, and marks that result from each stroke and each pause during the painting process. The rippled texture along the concave-convex surface and the contrasting qualities in light and color showcase the influence of––and Guan Xiao’s further development with––Impressionist techniques.

Both of Yong Xiang Li’s works are studies made for 8 Chairs (Adolescent Fabrications) (2022). One of them is a portrait study that was developed after Yong Xiang’s friend, Li Siyi. Li depicts the figure as rather lazy and fragile in appearance, yet glaring, exaggerated, and determined. He placed this character among an imposing scenery to highlight his relatively “vulnerable” state. In order to show the state of hiding, he expresses the emotions conveyed by the character’s expressions. Li usually works from a photo of the character, but instead of transcribing it directly, he draws a small draft from memory and then adjusts the details according to the photo, and finally sketches or projects the image onto a wooden board for painting. The other study is a draft of the overall concept of the work, including the general plan of the composition, the selection of plates, the division method and the basic relationship between light and dark. It also involves the control of details, such as the gesture of the hand and the design of the metalwork; however, these ideas will not all be applied to the final work.

The work Confidence (Cappuccino) (2022) comes from a long-ago dream of Zhou Siwei. In the dream, white-collar workers commuting in the morning rush hour oscillate with the movement of a bus. When the lens cuts to the coffee shop, the artist waits in the white-collar line for his daily fix of cappuccino, imagining the future of macroeconomics and daily necessities. Zhou Siwei takes the coffee, rotates the cup 180 degrees horizontally, and the word “confidence” faintly appears on the milk froth, but before the artist can take out his cell phone to take a picture and send it to his friends, the dense milk foam is dissolved and swallowed by the hot and humid coffee. 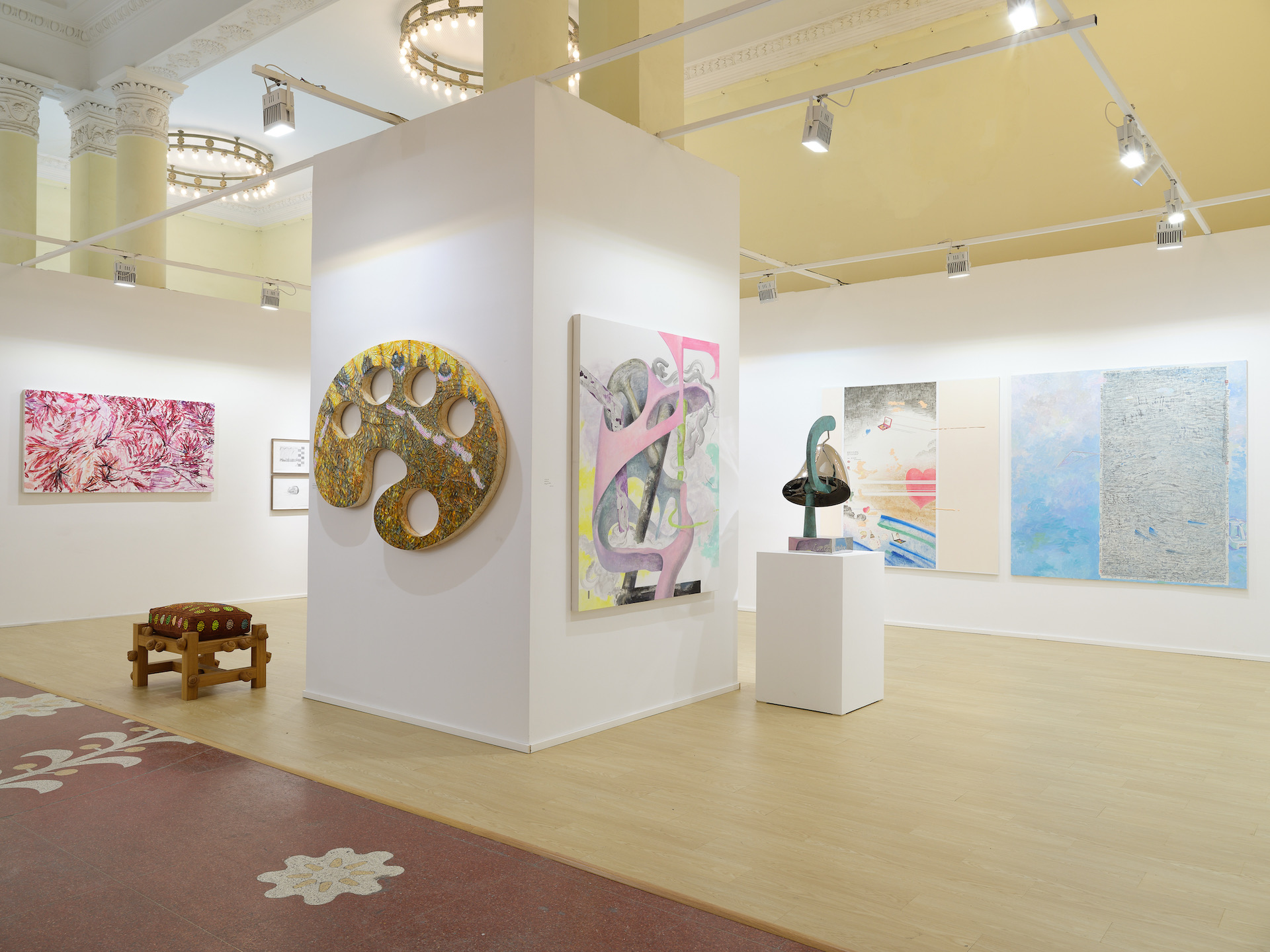 Cong Cong’s new work focuses on the specificity out of abstract lines and colors, pulling and deconstructing εἶδος (eidos) from the void and infusing it with tangible experiences. The Scent of Roses (2022) is inspired by a body wash used by Cong Cong, with a complex fragrances while rose as the main note. The flowing fragrance and the touch of the skin are visually presented as rose petals/threads blossoming, as if capturing a moment of a cosmetic advertisement. The unrestrained brushstrokes reveal romance and relaxing joy, and the overlap of red and purple also brings out the vigorous vitality and love of life, which can fall into the reality of happiness when poured with unconventional tenderness.

Liu Yin‘s series of works depicting Snow White and Alice is her projection of the current situation of women. In Liu Yin’s view, the story of Snow White and Alice tells of the reality that women are always on the run, and that behind the emotions and encounters, women are often in danger of being ignored and disregarded. As with the controversy over the image of Marilyn Monroe in contemporary art, Snow White as a representation of femininity embodies the omnipresent gaze directed at women, that judges and even shapes and constructs. Through the medium of cross-montage, Liu Yin keeps reproducing the same passage of the fairy tale from multiple perspectives, generating layers of understanding and reflection on the same moment, thus providing a more pluralistic interpretation of women’s identity and circumstance.

2022 ART021 is the first time that Daniel Dewar & Grégory Gicquel have collaborated with Antenna Space. Working as an artist duo since 1998, Dewar and Gicquel have for over twenty years explored and experimented with craft techniques, materials, and both modern and traditional tools in an ongoing foray into the artist’s and—more generally—humankind’s relationship to labor and production. Each new work is created at the hands of the duo themselves after labor-intensive and empirical periods of trial, error, fecund failures, and meaningful surprises. In addition to their singular approach to materials and processes, Dewar and Gicquel combine their media with a menagerie of incongruous motifs, their practice uses these symbols and archetypes both as a motivation and as an augury of their elaborate personal philosophy. In the series of oakwood benches, Daniel Dewar and Grégory Gicquel probe the distinction between inanimate objects and animate creatures or plants, as well as the historical separation of autonomous work of art and object of utility. The benches each comprise a sturdy and austere structure onto which carved snails cling, their fleshy bodies tucked away inside the whorls of their shells. The snails connote slowness, the veins in the wood evoke the steady passing of time, and the body parts rise and fall at the surface as if below a veil of water: we are but visitors to this earth. Plump and intricately embroidered cushions complete the objects in terms of decoration and comfort, while unfolding the duo’s thoughts on species cohabitation. The artists have integrated local sphinx or “hawk” moths into this new iteration alongside their travels in Brazil in 1998, the variegated Eurasian sphinx moth species, creating a decorative and speculative globalized ecosystem. 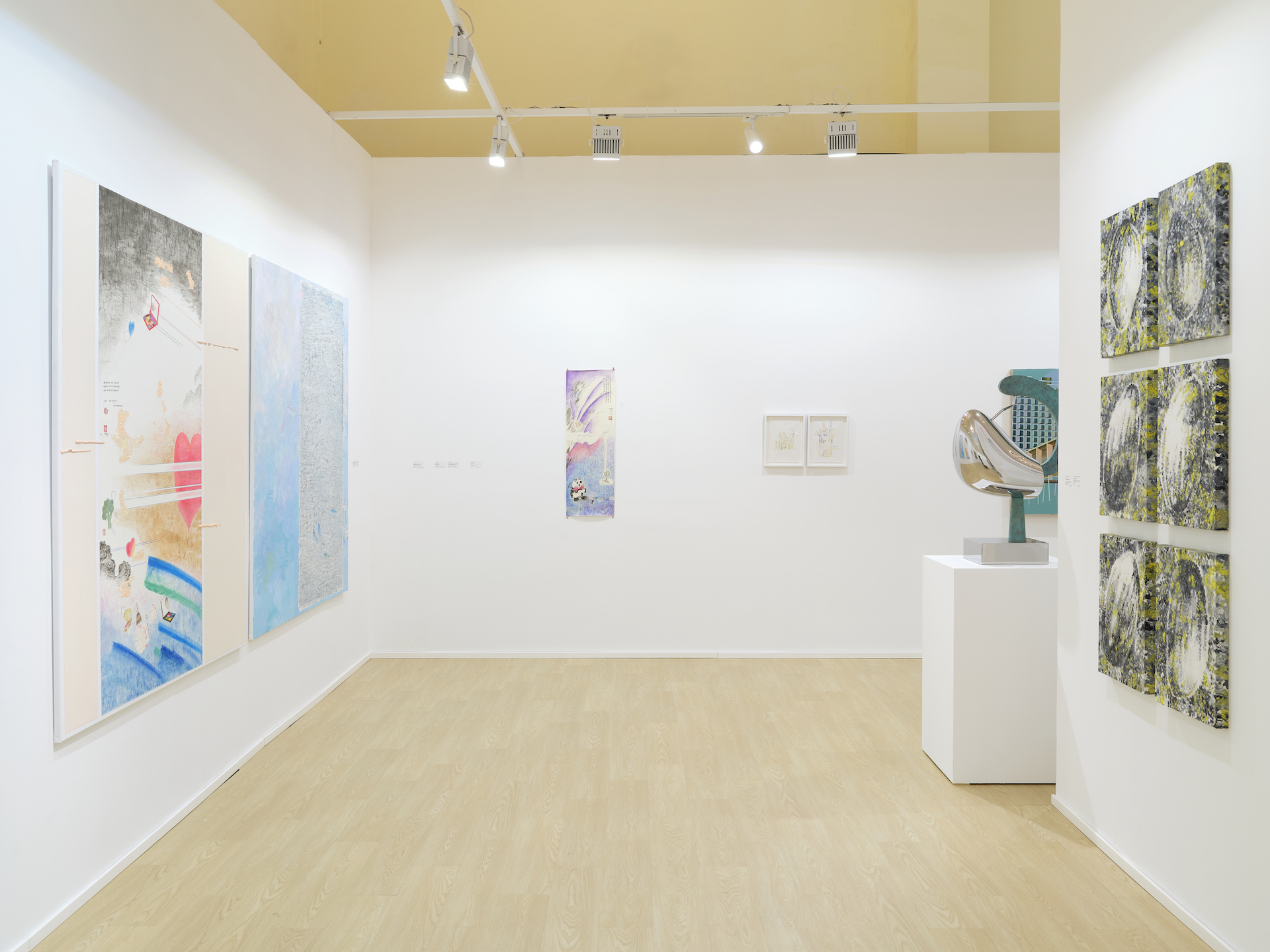